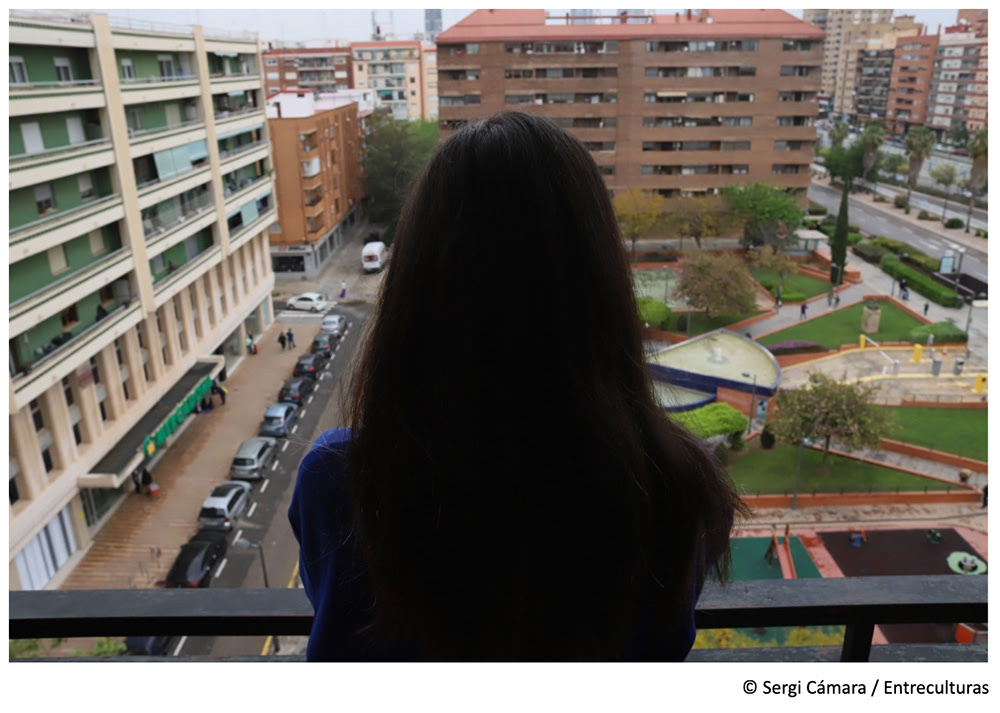 Sineyi is a Venezuelan mother and asylum seeker. Now she is living in Valencia, where she has been building a new life for herself and her daughter, Sidney, thanks to the accompaniment of the Jesuit Migrant Service, after a journey full of difficulties. We were able to learn about her life story during the press conference for the Caminos de Hospitalidad #SumoMiCamino. A story as hard as that thousands of refugees and migrants who are forced to leave everything behind, led by war, conflict or persecution.

During the presentation, Sineyi describes how she had to leave her country in 2018 in a very unstable political climate. She left her home with her daughter with just a few bags and without knowing the destination country they were heading to. She remembers how they left in the early hours of the morning, sneaking out and trying to reassure her daughter. “We are going to be fine”, she repeated on the bus to the Colombian border.

One of her biggest fear was the risk of an encounter with armed groups.  “They charge what they call there ‘la vacuna’ to every person who move from one state to another”, she explains. “My fear was my daughter, because they take children, boys to train them and girls to prostitute them. On the bus I put all the bags I could on her and prayed that they wouldn’t see her. Four men got on the bus twice, saying: ‘whatever I like, I’m taking it’. They took the money from the driver. But we made it through and arrived at the Colombian border with the scare in our bones”.

“I had to deliver the documents to the immigration office to be able to leave Colombia. [The immigration officer] told me that ‘the girl cannot leave because children are from the homeland’ and unfortunately, children cannot leave the country” she remembers. “They stamped my passport, the child’s was not. I started to cry. We left the two small suitcases on one side, which were the only things we were able to take out, because my priority was to get my daughter out. I touched the boy’s heart and he stamped her passport. I was three hours of anguish.

After their stay in Colombia, Sineyi and her daughter headed for Spain “hoping everything would turn out well with no more anguish and despair”. However, things were not easy either. Since their arrival in our country in May 2018, they had to face many times incomprehension and slow and complex processes when applying for political asylum. In addition, the pandemic made their economic situation even worse. “It was three years of anguish”, she explains with a broken voice.

Everything changed when she contacted SJM Valencia and they entered the Hospitality program, which has a network of reception apartments for refugees, migrants and asylum seekers. “In two months in the reception apartment they have made me feel that I am alive, that we are professionals and that we can develop ourselves,” she explains. “In January I wanted to die because I didn’t see a way out of my life, but today I really feel alive and I feel that I can go on, that I can move forward”.

People like Sineyi and her daughter, who have had to leave everything behind and who are in a moment of maximum vulnerability, deserve all our support to be able to continue with their lives. From the network of Hospitality projects carried out by the social works of the Society of Jesus, we continue to accompany them, offering them shelter, opportunities and hop in these complex moments of crisis.