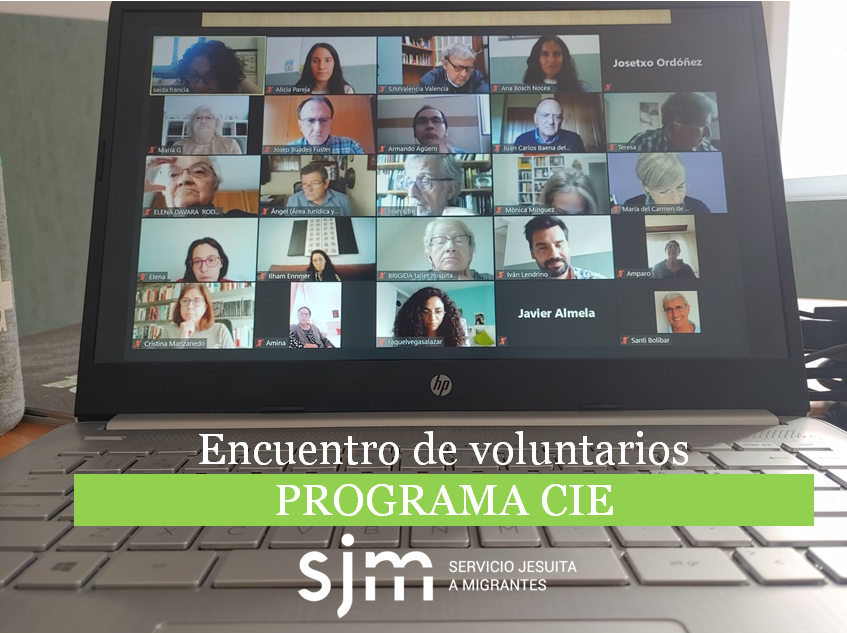 On 12 May, for the first time, a meeting was held for all the volunteers who are part of the visiting teams to the CIEs (Immigration Detention Centers) in Barcelona, Valencia, Algeciras and Madrid. It was a virtual meeting where the volunteers themselves had the opportunity to get to know each other better and exchange experiences of a common work, such as “accompanying, serving and defending” the people who are interned in the CIE.

Volunteers – old and new – have put into words the feelings aroused by knowing and accompanying those who are deprived of their freedom behind bars “dreamcatchers”, as they defined the CIE. During the meeting, Cristina Manzanedo and Ilham Ennmer shared their testimonies with us, bringing us closer to life stories with which a bond is created that goes beyond the visits, and people to whom we try to give back the dignity they believe they have lost by being interned in these centres.

Cristina told her story following up the case of Samba Martine, a Congolese woman who died in the CIE of Madrid ten years ago due to an accumulation of medical negligence, and Ilham, on her part, shared her experience as a translator in the CIE of Algeciras, a city which, she said, she could not see in the same way since she started volunteering; her perception of the place changed even in the daily things, such as walking through its streets or bathing on the beach.

The meeting highlighted the importance of networking and the necessary convergence between legal work and citizen mobilisation to achieve a fairer world free of these centres for the detention of foreigners.

The general feeling of gratitude for being able to share stories and recharge each other’s batteries was mixed with those shared feelings that came to light when talking about such hard work: “Powerlessness, but also hope for the commitment of so many little people”. In the space there was also room for suggestions and no one better than those people who cross the doors of the CIE to do so.

WE THANK all the people who give their time to accompany those who are on the other side of the walls of a CIE, being an example of service and testimony of hope to continue “rowing all towards the same goal, leaving aside borders”.