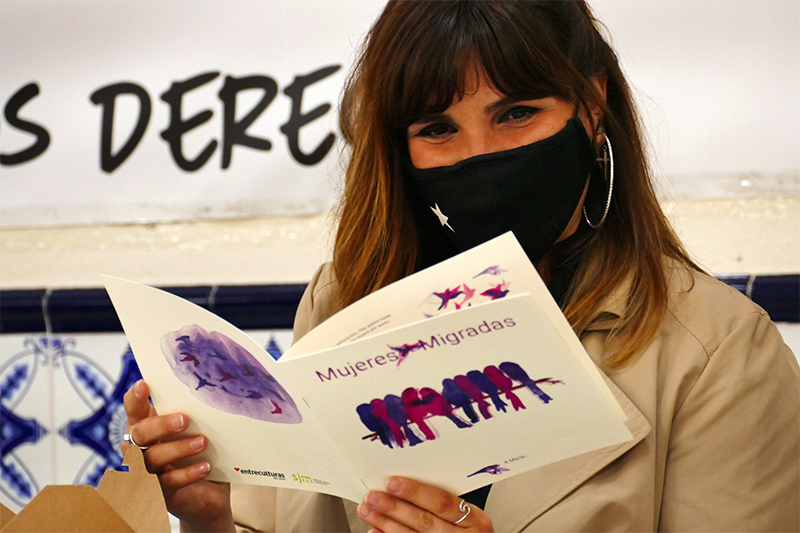 On the occasion of the first anniversary of the release of the song “Aves Enjauladas”, singer-songwriter and activist Rozalén and Beatriz Romero, her sign language interpreter, travelled to Valencia to visit the families and groups of migrant women at risk of social exclusion of the Jesuit Migrant Service-Valencia, supported by Entreculturas.

In April 2020, in the midst of confinement, Rozalén gave us hope in the form of a song. Her solidarity song “Aves enjauladas” (Caged birds) has been, throughout this year, a symbol of solidarity and optimism that highlights the lessons learned in the time of Covid “to return with more strength”.

“I really wanted to come and meet you. When the song came out, many people were having a really bad time and I thought it wasn’t fair for me to keep it, so I spoke to Entreculturas and told them that I would like to connect it with what is happening close to us, also here in Spain. That’s when they told me about this Jesuit Migrant Service project. Thank you to all of you who make this possible, it has been very exciting and I never stop learning from the struggle of so many incredible women like you”, explained Rozalén during her meeting with the women.

One of the most moving moments of the meeting took place when the women performed a short play based on their own life stories: Mujeres Migradas (Migrated Women). A script written by the women themselves that reflects the struggle and strength of so many migrant women (you can download the full script here).

The funds raised from the more than 5 million plays of the song have gone to support the Jesuit Migrant Service’s network of shelters for families, women and children in vulnerable situations, specifically the network of four shelters located in Valencia that form part of the Hospitality project. “Aves Enjauladas serves and has served as a symbol, and the families have understood this. This song was reflected in help and joy for many families,” shared Angélica Zuluaga, a psychologist at SJM Valencia.

Mustafa Mohamed, Director of SJM Valencia, said that “Aves enjauladas has been a breath of fresh air for the organisation. We are committed to the integration of migrants, one of the most vulnerable groups in society, and we work along several lines, such as programmes aimed at supporting migrant women, who are a particularly vulnerable group. Many have been left practically homeless or have very little support from the administration, which is why it has been a particularly hard year”.

Currently, SJM Valencia’s shelters have a total of 12 families, 13 of whom are women and 15 children and adolescents, mainly migrants, whose socio-economic status has been severely affected by the pandemic. “One of the things I feel most identified with in the song, perhaps because of the process I came from, is when she says: “I darned my little cloths” of courage, of valuing… It wasn’t easy for me, I never thought I would have to migrate, to see myself forced to do it. This group has really helped me to darn my little cloth”, says Tanya Picón, from the group “Mujeres Reconstruyendo Historias”. Through music, families and women like Tanya have access to food, help with their children’s education, medicines and clothes. For these families, the shelter flats have become their most faithful home and support in these times of great uncertainty.

With the funds raised, the accompaniment of the families has been reinforced so that they can continue with their process in the midst of this uncertain context caused by the pandemic. Spaces of mutual support have been created for women where they can share experiences, claim their rights and make visible the reality they live as migrant women in search of a better future. In addition, it is hoped that with the new normality, the integrative ecology garden project, an initiative that cares for, accompanies and integrates women both with themselves and with their environment, will be taken up again.

“Caged Birds” is already a hymn of hope that speaks of what we live. It metaphorically describes the respect and awareness of everyone to do great things with very small details and has generated a great network of solidarity. As Rozalén sang in the flats, “it’s time that what belongs to others and what belongs to oneself matter equally” and when all this is over, let us always remember the lessons learned during the confinement to collectively build a better world.