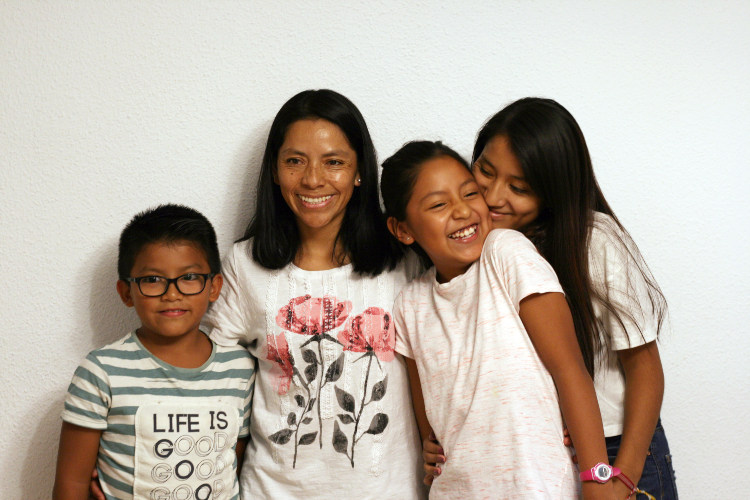 From the Jesuit Migrant Service (SJM), with the support of the #Seguimos campaign, we still want to be close to women with dependent children who are especially suffering from the crisis resulting from covid-19, by opening flats of autonomy. In Madrid, Pueblos Unidos accompanies several single-parent families with care to cover their basic needs, legal, social and employment advice in this difficult context.

Alicia lives with her four children in a flat in Madrid. Of Ecuadorian origin, after having gone through all the processes of regularisation, job search, schooling, she is now facing the impact of covid19 on her life. After more than a month confined for being positive for the virus, without even being able to see her children in the same house, she is grateful for the support offered and faces the immediate future with caution but optimism.

“My family was directly affected in terms of work because I had to stop working… My four children were suspended from school for a few days and although I have not lost my job for the moment, the worry is always there. I have been on sick leave for a month now and I continue to test positive, although the symptoms are easing. During the confinement we had a very bad time, they were very hard days, but thanks to the support of Pueblos we never lacked food or the basics”.

Thanks to the support of #Seguimos, the network of organisations belonging to SJM has set up a series of autonomy flats for around 60 women with dependent children in seven autonomous communities. This project aims not only to provide residential accommodation for these families, but also to promote psychosocial support in this context, create a stable social network that facilitates their inclusion and provide legal support to help regularise their situation. Alicia tells us how Pueblos Unidos has supported her family during these months:

“They are always keeping an eye on the evolution of my illness with the whole family through phone calls, being a support with whatever we need at home whether it is in paperwork, food, medicines, etc. Above all, they have given us words of encouragement and impulse at all times, always offering themselves for whatever is needed, they have even gone to pick up the food that they give us monthly because we were all confined to the house. I have not seen my children for more than a month and they are taking care of the house because I am locked in my room and my children are still small, except for the eldest who is 20 years old. Personally, I am very grateful to everyone”.

The #Seguimos campaign of the Society of Jesus has set up more than 30 projects to help the most vulnerable population since the pandemic began.